English artist Steve Crisp (Steve Crisp) born in 1955 in Tonbridge, Kent, England. I started drawing at the age of 5. He received an art education at St Martin's School of Art in London and became a leading Illustrator in the film industry.

In addition, Steve crisp has successfully designed the book covers of many famous writers, including Stephen king, ray Bradbury and others.

Puzzles Steve Crisp - a great gift for fans of rural subjects, pictures of measured country life of the last century. 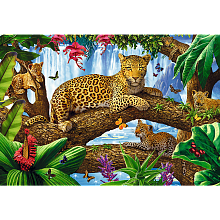