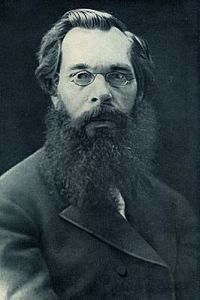 Alexey Kondratyevich Savrasov (1830-1897)-Russian landscape artist, founding member Of the Association of Peredvizhniki, author of the archetypal and iconic landscape "Rooks have arrived".

In his early youth, the future artist showed an ability to paint. Despite the wishes of his father, who wanted to adapt his son to "commercial Affairs", the boy in 1844 entered the Moscow school of painting and sculpture, where he studied in the class of landscape painter Karl Ivanovich Rabus. During his training, in 1850, he completed the painting "Stone in the forest by the flood", which art historians consider somewhat clumsy in composition. In the same year, for the painting "View of the Moscow Kremlin under the moon", he was awarded the title of non-class artist.

Savrasov's name was made famous by the work "View of the Kremlin from the Crimean bridge in inclement weather", made in 1851.

In 1852, after a trip to the southern provinces of Russia, he painted the paintings "Steppe in the afternoon"and" Dawn in the steppe".

In 1858, Savrasov became the head of the landscape class of the school of painting and sculpture. The following year, he wrote "Landscape with a river and a fisherman", one of the best landscapes of Savrasov.

In 1860, Savrasov participated in the first exhibition organized by the Moscow society of art lovers.

In 1862, he traveled abroad: he was at the world's fair in London, visited France, Switzerland, and Germany. He painted several landscapes in Switzerland.

Together with Vasily Pukirev, A. K. Savrasov worked on creating a drawing textbook that included his Russian landscapes. In 1867, he painted the picture "Rural view", in 1869 - "elk island in Sokolniki", in 1878- "House in the province".

In 1871-1875, living and working mostly in Moscow, Savrasov participated in expositions Of the Association of traveling art exhibitions, in 1873-1878-in academic exhibitions. In search of new principles of landscape he worked a lot in the vicinity of Moscow: Sokolniki, filyakh, Kuntsevo, Mazilovo, strogin, Brattsevo; went to the Northern provinces of Russia, in the Volga region. During this period, his paintings appeared: the most famous — "Rooks flew" (1871)," Pechersk monastery near Nizhny Novgorod "(1871)," Flood of the Volga near Yaroslavl "(1871) and" rainbow "(1875)," country Road "(1873), " Grave on the Volga. Surroundings Of Yaroslavl" (1874).

Savrasov's paintings were also exhibited at world exhibitions-Vienna in 1873 and Paris in 1878, and at the all-Russian exhibition in Moscow in 1882.

Since the late 1870s, Savrasov suffered from alcoholism, and dark motives appeared in his work. In 1882, he was dismissed from the Moscow school of painting.

The artist spent the last years of his life in need. "In recent years, when A. K. Savrasov was already completely drunk, he sometimes appeared in the Studio in rags," recalls Vladimir Alekseevich Gilyarovsky in the book "Moscow and Muscovites". Savrasov's work became uneven: in 1887, the painting "Landscape. The village of Volynskoe "with a factory smelling smoke on a nearby Church, in 1893 — the painting" Spring. Gardens", in 1894 - "Rasputitsa".

A. K. Savrasov died on September 26 (October 8), 1897 in Moscow in a hospital for the poor on Khitrovka. He was buried at the Vagankovo cemetery.