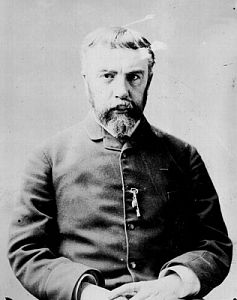 Vasily Dmitrievich Polenov was born on may 20 / June 1/ 1844 in St. Petersburg in a highly educated noble family. Father-Dmitry Vasilyevich Polenov (1806-1878), a diplomat, passionately interested in archeology and bibliography. Mother-Maria Alekseyevna Polenova (1816-1895), nee voeikova, granddaughter of the architect N. A. Lviv, was a children's writer and a talented artist.

Parents sought to foster hard work in their children, encouraging them to pursue science and art in every possible way. Two of the five children became artists. The first drawing and painting lessons were given to children by Maria Alekseevna, then a student of the Academy of arts P. p. Chistyakov, later an outstanding draftsman and teacher, was invited. In 1860, Vasily Dmitrievich studied at two educational institutions in St. Petersburg-the University and the Academy of arts. In the spring of 1871, he graduated with the title of candidate of rights.

In the autumn of 1871, V. D. Polenov received a large gold medal at the Academy of arts for the painting "the Resurrection of the daughter of Jairus" and the right to travel around Europe for 6 years at the expense of the Academy.

During the years of travel, Polenov tried all genres of painting, worked a lot in the open air, as evidenced by numerous studies that differ in the novelty of the selected motifs, the solution of the most complex plein-air tasks.

"One of the unexpectedly big holidays was the appearance at exhibitions of the first intimate landscapes of Polenov in the mid-70s" Moscow courtyard"," grandmother's garden"," Gray day" and a number of other Turgenev motifs were unexpectedly new, fresh, imbued with truth, subtle musical lyricism and elegant technique, " Ostroukhov wrote at that time. Polenov was the founder of the new Russian painting, giving life to the lyrical landscape.

For a long time, the artist worked on a large cycle of paintings from the life of Christ, striving to "create a Christ not only coming, but already coming into the world and making his way among the people." More than fifty paintings were written on Evangelical subjects. In an effort to achieve historical authenticity in the writing of works, Vasily Dmitrievich makes a trip to the countries of the East. A huge amount of natural materials, travel notes, and costumes were brought from Syria, Egypt, and Palestine.

The 80s were the heyday of V. D. Polenov's artistic and pedagogical activity. For twelve years, he taught at the Moscow school of painting, sculpture and architecture, where he raised a whole generation of first-class Russian painters, including I. Levitan, K. Korovin, I. Ostroukhov, A. Arkhipov, and S. Ivanov.

Music played a prominent role in the artist's life. Having no special education, he composed operas and romances, and arranged home music evenings.

The construction of the estate on the picturesque Bank of the Oka river allowed the artist to reveal another side of his multi-faceted talent. Polenov worked a lot on the Oka: he painted pictures, composed music, planted trees in the Park, built a dam, and helped build boats.

With his characteristic energy, he was engaged in the problems of public education. Vasily Dmitrievich built two schools in the surrounding villages. His last works were also dedicated to children: in the 20s, he created a diorama-a trip around the world in pictures. Magic light pictures have become a feast for the peasant children.

Vasily Dmitrievich Polenov died on July 18, 1927 at the age of 83. In 1926, one of the first in Russia, he was awarded the honorary title of People's artist of Russia. Vasily Dmitrievich was buried on the high Bank of the Oka river in the village of Behovo, in a simple village cemetery. On the grave, as it should be in the will, a wooden cross made according to the artist's own sketch is placed. 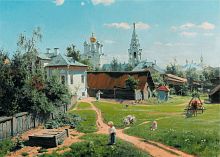