Michael Ryba (born 23 September 1947, died 5 February 2014) is a German graphic designer, Illustrator, author, visual artist and art teacher . He was one of the most versatile German artists of our time.

He studied at the Muthesius school in Kiel, at the Folkwang University in Essen, and at the Academy of fine arts in Dusseldorf for drawing and painting. Among his teachers was Joseph Boyce . He then began a successful career as a freelance artist, graphic artist, and author.

From 1981 to 1998, He was responsible for the artistic support of Musicae Pro Mundo Uno (AMOR) in Rome. His numerous books, cartoons, and puzzles were well-known far beyond Europe and were translated into Japanese and English. Over time, he taught at various universities as a guest lecturer, and since 2007 has worked at the Academy of communications in Freiburg .

His work is characterized by a rare versatility, so it includes works of various styles, such as realistic images, abstract art, cartoons and architecture. The artist is one of the founders and leading figures in cartoon art.

Michael Ryba was married and the father of three daughters. He lived with his family in Lenzkirch in the black forest .

In February 2014, he was killed in a car accident. 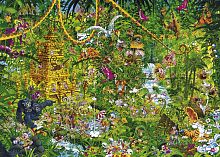