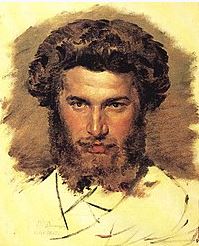 Arkhip Kuindzhi (translated from Urum surname Kuindzhi means "goldsmith") was born in Mariupol (modern Donetsk region of Ukraine) in the Karasu quarter, in the family of a poor Greek shoemaker. In the metric, he was listed under the surname of Emendzhi — "a working man"[2]. The boy lost his parents early and was brought up by his aunt and uncle on his father's side. With the help of relatives, Arkhip learned Greek grammar from a Greek teacher, then, after home lessons, attended a city school for a while. According to the memoirs of his comrades, he studied poorly, but even then he was fond of painting and drew on any suitable material — on walls, fences and scraps of paper.