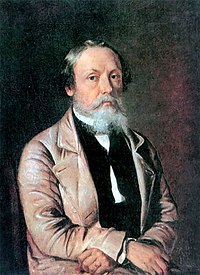 Ivan Trofimovich (Fomich) Khrutsky (1810-1885) - Belarusian artist, painter, nobleman of the leliv coat of arms. He is known for his still lifes and group portraits.

Ivan Hrutsky was born on January 27, 1810 in the town of Ulla (now Beshenkovichi district, Vitebsk region) in the family of a Greek Catholic priest, nobleman Tomas (Thomas) Hrutsky.

Ivan Khrutsky received his secondary art education at the Polotsk higher PR school. In 1827, he came to St. Petersburg. Here, until 1829, he took lessons from the English painter J. Dou Yi simultaneously studied at the Imperial Academy of arts as a freelance student. Copied in the Hermitage. In 1830, Khrutsky entered the Academy of Arts. There he studied under such masters as A. G. Varnek, M. N. Vorobyov, K. p. Bryullov, and F. A. Bruni.

In 1839, after the death of his father, Ivan Fomich left St. Petersburg. In 1844, he purchased the Zakharnichi estate in Polotsk County (20 km from Polotsk), where he built a house and laid out a garden according to his own project. Since 1845, I. Khrutsky lived there permanently.

Ivan Fomich died on January 13, 1885; he was buried in the family crypt in the Zakharnichi estate.