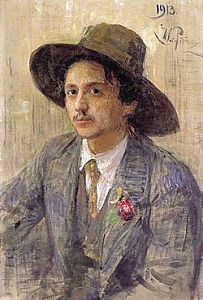 Isaak Izrailevich Brodsky (1883-1939)-Russian and Soviet painter and graphic artist, teacher and organizer of art education, honored artist of the RSFSR (1932), one of the main representatives of the realist movement in Soviet painting of the 1930s, author of an extensive visual Leniniana.

Isaac Brodsky was born on December 25, 1883 (January 6, 1884) in the village of Sofiyevka near Berdyansk (at that time — Tavrichesky province, now — Zaporozhye region of Ukraine), in a Jewish family. My father was a merchant and landowner, a merchant of the second Guild of the city of Nogaisk in the Tauride province. Her younger sister Raisa (1894-1946) was a musician and a graduate of the Saint Petersburg Conservatory.

In 1896, he graduated from the Berdyansk city school. Considered as the birthplace of the city of Berdyansk. Since childhood, he showed a talent for painting. From 1896 to 1902, he studied at the Odessa art school under L. D. Iorini, K. K. Kostandi and G. A. Ladyzhensky. Then he moved to Saint Petersburg and continued his studies at the capital's Higher art school at the Imperial Academy of arts. For five years he studied at the Academy with I. E. Repin. In 1909-1911, with the money of the Academy, he traveled to Germany, France, Spain and Italy, in particular, visited M. Gorky on the island of Capri.

Before the October revolution of 1917 and in the 1920s, Brodsky participated in exhibitions at the Academy of arts, was an Exhibitor of the "Association of South Russian artists", "Association of traveling art exhibitions", "society named after A. I. Kuindzhi", "Community of artists".

In the summer of 1917, he began a portrait of Alexander Kerensky (he finished it in 1918, when the Provisional government was overthrown), and after the October revolution, he actively painted portraits of Bolshevik leaders. Brodsky worked hard to create images of Soviet leaders, primarily V. I. Lenin and I. V. Stalin, as well as Lunacharsky, Voroshilov, Frunze, Kalinin, Zinoviev and others.

Grave of I. I. Brodsky on the literary bridges in St. Petersburg.
Brodsky died on August 14, 1939 in Leningrad. Buried at Literatorskie Mostki at the Volkovo cemetery.