Moving to Mexico city with his family, he began drawing at a young age. Won several competitions at local art exhibitions.

At the age of seventeen, he began producing children's television programs that featured his own drawings. During this time, he also began a musical career playing drums in a local band. He went on to play in well-known American top 40 singing groups of the 50s and 60s.

In the United States, he continued his painting and was recognized for his seascapes, selling his paintings across the country.

Kazai died in 2010 in Brownsville, Texas. 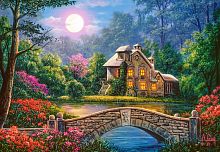