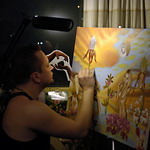 he studied in the city of Zhigulevsk, where he began his career, held the first exhibitions, and founded the Union of modernist artists. Currently lives and works in Moscow.

He has been painting since 1990. Being a surrealist by vocation, I entered the Samara Aerospace Academy, but I realized in time that my passion for painting is forever. He studied copying Russian classics of 19th-century painting and European Surrealists of the 20th century. Studying the artistic techniques of the incomparable Salvador Dali, he gradually found his own creative method-Philosophical surrealism.

Along with the works of Salvador Dali (with the great Spaniard Andrew is connected by a bizarre history of distant kinship), the artist is inspired by the work of the Argentine writer Jorge Luis Borges and his concept of multi-world interpretation, the existence of parallel worlds and the possibility of intertwining time lines. Philosophical surrealism is a combination of graceful and elegant forms, each of which is a readable sign or symbol. Thus, any picture can be read like a story. The symbols are sometimes easily recognizable, and sometimes have many interpretations, leading the viewer into a mysterious maze, similar to the one described in Borges 'story" the Garden of diverging paths»

From 1992 to the present-participant and organizer of more than 20 major exhibitions and events in the cities of Moscow, Figueres (Spain), Paris, Hamburg, Zhigulevsk, Neftegorsk, Tolyatti, Naberezhnye Chelny, Nizhny Novgorod, Sochi, Cheboksary 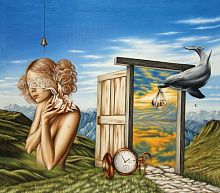 Puzzle wooden 220 parts DaVICI: the Greatest miracle in the world
$51,08