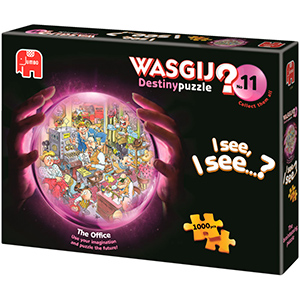 jigsaw Puzzles Wasgij Destiny series of the Dutch company Jumbo is an attempt to look into the future, no less! The task of the holder of such original puzzle "on the contrary"- to collect the picture that he sees on the package, and one that will show as her characters and items will look like in 20 years! The beauty will probably be old, revered sir, seem to gain fat, what about the elephant in the middle of the street - so here it will remain or on this place will rise new York skyscraper?
To answer this and other questions will help a treasured box with a jigsaw puzzle Wasgij Destiny is, to collect which will appeal to both children and adults! After all, the intrigue remains until the very end, especially because the reason - comic characters drawn in a cartoon style. They have colorful images, original costumes, original character and a great desire to be a natural - funny, ridiculous, embarrassing, and perhaps not without reason frightened.
In our online store you will be able to choose jigsaw puzzles Wasgij Destiny series, the plots of which you particularly like!