Jackal (the Jackal) – a game for romantics, especially those who love adventure. The game is created not only in Russia, but also became the best "nastolki"strategy in 2011. And invented it all in the mechanics and mathematics of Moscow state University...the player's Task – to get treasures from a mysterious island, of which there accumulated an immense amount. Just doing it is unlikely to succeed – have a serious struggle with competitors (players try on the images of the warring parties – pirates or conquistadors). All in order to capture as large reserves of gold!

Players will be on the three sailors, which will produce various manipulations with the treasure to join the attack from ill-wishers and all at some time feel themselves masters of the island (as players delegate their powers).Separately want to say about the playing field. It is a map of the island in large format, lined with located at random squares. The map is made in such a way that each time players will explore the land on which they fall (must be "open" field of the cell), and thus the route for the adventure the same will not be. In a set of 117 tiles of the playing field, 4 player ship, 12 chips sailors, 37 coins, the rules of the game.

An additional set of the Jackal: the Archipelago. The island of a Thousand caves
$6,29 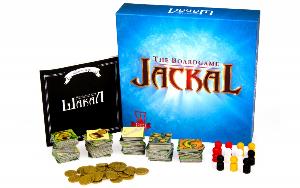