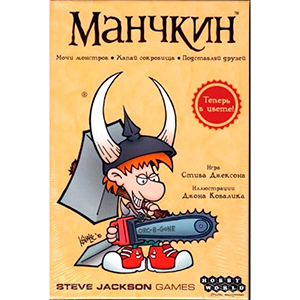 Always wanted to win the "Plutonium dragon"? And "Boom boom" you finally got? Don't pass it by! "Munchkin" is the solution to all your problems! But if you don't know who these guys are – read on. We'll explain everything!

Series of games "Munchkin" - naughty card parody of role-playing, science fiction and horror movies. Gathered at the same table a few Munchkins (read players) cut monsters and stuff your pockets with treasures. Why? Yes, in order to be the first to reach tenth level! And here all means are good. Substitute opponents and make deals. Muhlyuyte! All in order to win!

"The Munchkins" - a huge number. But most of them mechanics unchanged. On your turn, you kick down doors in the dungeon. If I met a monster fight with him. Not met it does not matter: you can poke around in his stuff and find treasures. Or play a monster from his hand. Got a treasure – wear them for yourself! "The sword of song and dance", "Hotelname ring" and a bunch of useful gadgets will help even easier to bring down monsters!

But sooner or later your friends will be envious disturb you. The most awkward moment you throw in the curse, or help the enemy. Beware of such a two-faced players! As a warning curse them, and never help them in battle. Reached the tenth level? Congratulations! Now all the losers are thrown off you :)

Tired of playing the usual "Munchkin"? Don't despair! Waiting for you seven supplements; with the new rules and maps. And if that's not enough, take the other "Munchkins"! Star, Vampire, Pirate – everyone will find something to your liking. But most importantly – they are all compatible with the main game.

We should also mention two games: "Munchkin Quest" and "Munchkin under siege". Both are incompatible with basic "Mancina". First, you no longer have to strain your imagination. Because the cave is now routed directly into the table! A fine painted room and chips monsters will force you to take another look at the famous game.

"Munchkin under siege" is a special beast. The group of Munchkins need to protect the castle from monsters. But everyone should grab as many trophies as possible. Think about what to do! And in this game you can play alone. So if you sick of your friends can spit on them and go have all the fun. 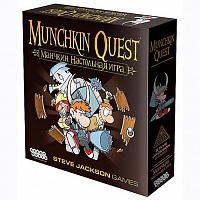