Michael Fitzpatrick began his art career in the mid-sixties, attending the art center of the College of design in Los Angeles. After graduation, he moved to work for D'arcy, McManus, Masius Advertising in new York as an art Director. He then moved back to the coast, where he founded and ran his own advertising Agency: Fitzpatrick and Walker adv. Drawing and design have always been a big part of Michael's daily life. In new York, hundreds of people drew storyboards for television ads. In California, design and illustration were the center of attention.

All this commercial activity was just a backdrop for Michael's true love - drawing. In the early nineties, he seriously engaged in his fine art. He has many collectors around the world, and is exhibited in galleries in NAPA valley and Sausalito. For two years, he held the prestigious position of artist-in-residence in the Chandon Domain.

Michael paints in oil in a traditional style, which allows him to make full use of his classical training. Although he mainly paints portraits, still life and landscape are also very much represented in his work. 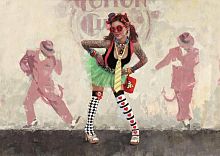