Kathy Goff's unique approach to animal art is rooted in her New England birthplace. Living on the edge of the reserve, she raised a number of orphaned and injured creatures that served as objects for her art. At the University of Hartford school of art, Goff majored in sculpture, including animals in her figurative work.

In 1970, she opened her Studio in Colorado and traveled extensively, studying and depicting wildlife in California and the southwest, in Europe, in the Eastern coastal regions, and in national exhibitions, as well as in galleries in New England and the southwest. 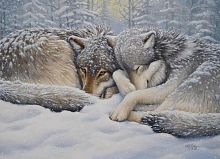