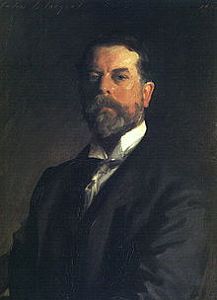 John singer Sargent (January 12, 1856, Florence — April 15, 1925, London) was an American artist, first cousin of the famous botanist Charles Sargent, and one of the most successful painters of the Belle Époque period.
The son of a doctor, he studied in Italy, Germany and France, where his mentor in 1874-1878 was Emile Auguste Carolus-Durand. The artist's early work was highly appreciated by Henry James. In France, Sargent became close to the Impressionists, most closely-with Claude Monet (known Sargent painting Claude Monet, working on the edge of the forest). He was also friends with Robert de Montesquieu, Paul Elle. For the most part, he lived in France and great Britain, traveled a lot in Europe, North Africa, the Middle East, often visited Italy, and more than once came to the United States.

Sargent influenced the creative style of Marc Lancelot Simons and other young artists of the early 20th century.
The artist created approximately 900 oil paintings, 2000 watercolors, and many graphic works. A number of his works are kept in American museums, primarily in the Brooklyn Museum in new York. 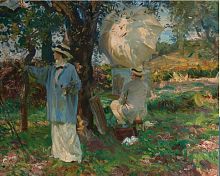