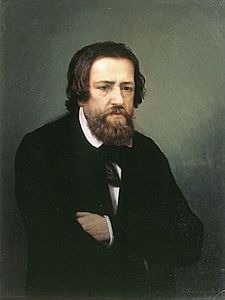 Alexander Andreevich Ivanov (1806-1858)-Russian artist, academician, Creator of works on biblical and ancient mythological subjects, representative of academism, author of the canvas "the Appearance of Christ to the people".

Alexander Ivanov was born in the family of an artist, Professor of painting Andrey Ivanovich Ivanov (1775-1848), who in the same year was approved as an associate Professor of the historical class of the Imperial Academy of arts. At the age of eleven, he entered the Imperial Academy of arts as an" outsider " student. He studied at the Academy with the support Of the society for the encouragement of artists, studied under the guidance of his father. Having received two silver medals for his success in drawing, he was awarded a small gold medal in 1824 for the painting "Priam asks Achilles for the body of Hector". In 1827, he received a large gold medal and the title of artist of the XIV class for the painting "Joseph interpreting the dreams of the cupbearer and Baker imprisoned with him in prison".

The society that patronized Ivanov decided to send him abroad on its own account, for further improvement, but first demanded that he paint another picture on the theme "Bellerophon goes on a campaign against the Chimera." Having fulfilled this requirement, Ivanov in 1830 went to Europe, and through Germany, with a stop for some time in Dresden, arrived in Rome.

In Italy, Ivanov's first work consisted of copying Michelangelo's "Creation of man" in the Sistine chapel and writing sketches on various biblical subjects. Diligently studying the Holy Scriptures, especially the New Testament, Ivanov became more and more interested in the idea of depicting the first appearance of the Messiah to the people on a large canvas, but before embarking on this difficult task, he wanted to try his hand at a smaller work. To this end, in 1834-1835, he wrote "the Appearance of the risen Christ to Mary Magdalene".

The painting was a great success both in Rome and in St. Petersburg, where in 1836 the artist was awarded the title of academician for it.

Emboldened by his success, Ivanov set to work on " the Appearance of Christ to the people." The work dragged on for twenty years (1836-1857), and only in 1858 Ivanov decided to send the painting to St. Petersburg and come there with it. The exhibition of the painting itself and all related sketches and sketches was organized in one of the halls of the Academy of Arts And made a strong impression on the public.

Ivanov died of cholera. He was buried in Saint Petersburg at the Novodevichy cemetery. In 1936, he was reburied with the transfer of the monument to the Tikhvin cemetery of the Alexander Nevsky Lavra