American Illustrator Charley Harper (August 4, 1922 - June 10, 2007) was born in Frenchton, West Virginia. His passion for the natural world began when Charlie was growing up on a farm in West Virginia. Attended the Cincinnati Academy of art, where he met his wife, Edie. Charlie Harper returned to the Cincinnati Academy of art as a teacher. Harper was best known as an Illustrator for stylized prints, posters, and book illustrations of the animal world. During his long and distinguished career, he illustrated numerous books, including the Golden book of biology, Bambi, magazines such as the Ford Times, print publications, posters, murals, as well as prints, lithographs, posters, and other works. His work focused on the natural theme and Harper often created work for organizations (including national parks, the Cincinnati zoo, the Cincinnati Nature Center, and the National Park service). Charley Harper called his style "minimal realism", when asked to describe his unique visual style, Charley replied: "When I look at a bird, I don't see the feathers in the wings, I just see the wings. I see exciting shapes, color combinations, patterns, textures, fascinating behaviors, and endless possibilities for creating interesting images."
The works of American modernist artist Charley Nagregochen are often used in puzzles, embroidery, appliques, patchwork and other types of needlework. 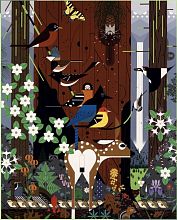 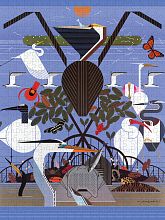 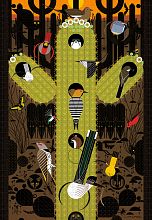 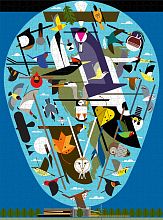 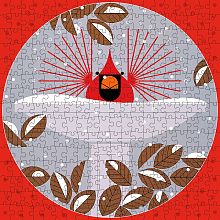