Puzzles of paintings by the Dutch artist Reint Withaar is the opportunity to see firsthand that Holland is an incredible beauty country. Why are only zabolochennaya mist, "wild" rural shore, desert crossing, flowering gardens, a fabulous lake, old Church, cute village houses, hidden behind a thick hedge, which are ably depicts in his paintings.
Reint Withaar was born in 1928 year, took my first painting lessons from his father. However, the war has made significant adjustments in the plans of the young artist, who was able to work actively only after its completion. Reint Withaar labored as an Illustrator and set designer, but in the end decided to found his own Studio-gallery, which, in particular, helped him to write a large number of landscapes glorifying the beauty of the beloved country.
In our online store jigsaw puzzles of paintings by the Dutch artist Reint Withaar presented under the brand name Turkish company Heidi (Art Puzzle). 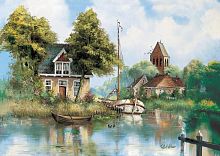