A registration confirmation request will be sent to the specified e-mail address. 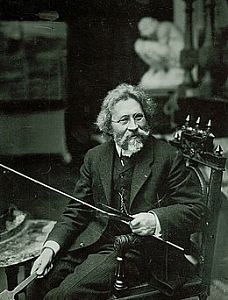 From the very beginning of his career, with the 1870-ies, Repin became one of the key figures of Russian realism. The artist managed to solve the problem of reflection in the beautiful work of diversity of life and surroundings in his work he was able to cover all aspects of modernity, to raise issues of concern to the public, alive to the topic of the day. Repinskoye artistic language was peculiar plasticity, he took a different stylistic direction from the Spaniards and the Dutch of the XVII century to the contemporary of Alexander Ivanov and the French Impressionists.

The heyday of Repin came in the 1880-ies. He creates a gallery of portraits of contemporaries, works as a historical painter and master of the household scenes. In the field of historical painting, he was attracted by the opportunity to reveal the emotional expressiveness of the proposed situation. The elements of the artist was the present, and even creating paintings on themes of the legendary past, he remained master of the burning of the present, reducing the distance between the viewer and the characters of their works. According to the art critic V. Stasov, Repin's work — "encyclopedia of post-reform Russia." The last 30 years of his life Repin held in Finland, in his estate Penates in Kuokkala. He continued to work, although not as intense as before. In recent years he has turned to biblical subjects. Repin in Kuokkala wrote a memoir, some of his essays included in the book of memoirs "Far close".